Teaching a child to understand the underlying structure of spoken language is a key component in the child’s development of phonemic awareness, a crucial skill for children who are learning to read.
It can be difficult, however, to explain the concept of syllables to a preschooler. Even small children are intimately familiar with the meaning of language. Sentences and words have meaning. But a syllable may have a meaning of its own (such as run- in running), or it may not (the al- in alligator). If a syllable has no independent meaning, many children simply don’t notice it as a unit of speech apart from the meaning of the whole word.

I recommend easing children into this tricky concept with a series of compound word activities. Compound words are multi-syllable words that are made up of smaller words, such as snowball, dollhouse, and horseshoe. Because each syllable of a two-syllable compound word is a word on its own, children are better able to notice the syllables and to understand what you mean when you talk about dividing a word into parts.

Recent research has shown us that synthesis (blending separate syllables into words) is easier for children than analysis (dividing words into syllables). So start with two synthesis activities. In the first, Making Compound Words, say two one-syllable words for the child (such as pop and corn), with a big pause in between, and the child will combine them to make a compound word. In a follow-up activity, Making A Longer Word, you give the child the two parts of a three-syllable compound word (e.g., blue and berry), to combine into a longer word.

Analysis of compound words is a more difficult skill, so I’ve created a series of six activities to teach the concept bit by bit. In Part 1, the child must identify the first part of a compound word (“Say fishbowl but don’t say bowl”), using a picture card as a visual clue. On the card are four pictures, one of which is the correct answer.

Part 2 is exactly the same activity but without any picture clues. Without pictures, the child will have to work harder to remember the word, divide it into parts, and say only the part you ask for.
Part 3 requires the child to pick out the second syllable (“Say rainbow without rain…what’s the last word in rainbow?”), with picture cards as clues. Part 4 is the same but with no picture cards.
In Part 5, give the child a mix of words. Sometimes you will have him tell you the first part of the word, and sometimes the second part. This is a big challenge for his memory and listening skills, but we provide picture cards to help him. In the sixth and final activity, the child must identify either the first or last syllable of a compound word, with no picture clues.

Start with the first of these activities, play it with the child for 10-15 minutes a day until he’s mastered it, then move on to the next activity. Before you know it, the child will be ready to dive into learning about syllables. 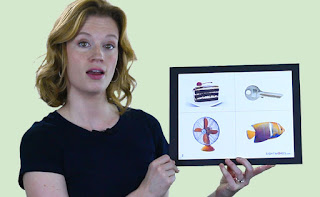 Margo Edwards is the Director of Content Development at SightWords.com, a website dedicated to the promotion of child literacy through a variety of free online resources. SightWords.com is proud to be sponsored by the Georgia Preschool Association.
Posted by Libby Hill at 10:59