Too busy to talk to our children... so what?

If you are asked the question: what makes humans different to animals? Many people would answer that it is our unique ability to communicate. However, in the 21st century this fantastic achievement is being eroded. Language learning just seemed to happen effortlessly and easily in the past. Without TV, computer games, DVDs etc it was much easier to 'just' interact.


As well as the technological developments there are other pressures of modern living which are having a major impact on this interaction.This was conformed by a recent ICAN survey which reported on parents' busy lives.The survey of 2,000 parents by children’s communication charity I CAN found that parents often have to work longer hours and therefore spend less time with their children. Three-quarters of those surveyed are taking on extra work and 35 per cent admitted increased workloads meant they rarely have time to talk to their children. One in five parents said they are too tired to talk with their children when they get home from work and 55 per cent said they have less quality time with them due to work.

Among those surveyed, one in five has taken a second job and a similar proportion is taking work home. A third said work calls or responding to emails at home often hampers attempts to talk with their children.
Yet the lack of parental interaction can cause a huge knock on effect. Parents have a major role to play in developing their children's speech, language and communication skills so paucity of their interaction means that spoken language skills will not be as good as they should be. This will then later affect schooling as they need an appropriate level of spoken language  before they are ready to learn written language.Too many children are starting school without these necessary levels.


It is very hard being a parent today, we have many, many pressures to cope with which weren't around in the 60s and 70s and so many other issues that make us feel guilty for not being the perfect parent. I should know, I am a single parent with my own business,  which is may be the worst combination for time demands. However, it's vital to make time for them as that's probably the most important thing you can do. 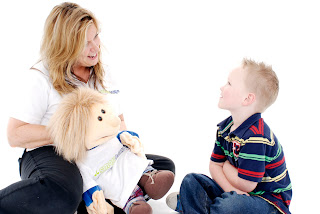 We've all made New Years resolutions about dieting, getting fit, earning more money but may be we should have a resolution of just spending more quality time with our children. I want mine to look back at their childhood and remember the time we had together, not that I was too busy for them. At the end of the day they are more important than anything else.


I've just done a reality check and know I could be better, how about you?


Our Pre-School groups are ideal to focus on pre-school interaction. We are also Hanen licensed Speech and language therapists so qualified to encourage parent-child interaction   www.smarttalkers.org.uk www.private-speech-therapy.co.uk

Labels: helping your child's language, how to be a good parent, parent-child interaction