Will Teaching My Baby Sign Language Delay His Speech? 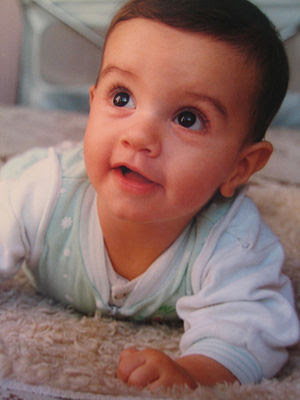 Guest blog written by:  Christina Schabow, MS CCC-SLP, speech & Language Pathologist and owner Baby Sign Language in Play
This is by far one of the most common questions I get form parents: Will teaching my baby to sign delay his speech? As a Speech-Language Pathologist (SLP) I love to answer this question! A good deal of research has been done to address this and has shown us that babies who sign do not have an increased risk of delayed speech/language. In fact, research indicates that many babies who sign actually go on to have early, advanced speech. Let's take a look at why this is so:
1) SIGNING IS NATURAL - If you think about it, babies learn naturally to gesture. They throw their hands up in the air to indicate "up", they clap to indicate "I like that!", they point to express "I want that". Signing with a baby expands on this already present intuitive means of early communication.
2) SIGNS ARE A BRIDGE TO SPEECH - Much like crawling is to walking, gesturing/signing is to speech. Crawling is a natural first step enabling a baby to explore her world before she is ready to walk. Signing empowers your child to communicate before she is ready to talk. Babies don't decide to forgo walking because they already have a method of moving around -- when their bodies are ready, they will walk! A point in time comes when walking becomes more effective than crawling. The same is true for signing and speech. Ultimately when your baby is ready, speech will more effective than signing. Just as babies gradually move from crawling to walking, signing babies eventually transition from signing to speaking.
3) SIGNING READIES A BABY FOR SPEAKING - Oh how I love to think about, write about, chat about the many ways signing prepares a baby for speaking. Signing families are very focused on communicating and thus spend a great deal of time in face-to-face, language-rich interactions with baby. As parents are signing with their baby, they use lots of repetition of both the signs AND the spoken words (speaking & signing should happen simultaneously). They talk about the objects they are signing about, and repeatedly show these objects to baby, demonstrating how those objects are used to keep the baby's interest. All this practice with language and words results in signing babies having broad receptive vocabulary knowledge. The rest is like dominoes: The earlier a child understands a sign the sooner he can use the sign, the more signs he uses the more words he can speak when his little mouth, tongue and lips are ready! It also should be said that signing babies have the advantage of participating in give-and-take conversations much earlier than babies who don't sign. This too readies a child for spoken communication. All of these things come together to lay the foundation for speech. It's like all of the pieces are ready and waiting and as soon as a baby is able, speech will take off!
Certainly there are times when even a signing toddler has delayed speech. But it's NOT likely the signing that has caused this. In fact, for the reasons stated above, one of the first things a SLP will do with a child who is late to talk is teach them to sign! And for those families who do have a child with delayed speech, I encourage you to think about the ultimate goal of signing and speech: COMMUNICATION. I can assure you that many a family with a late-talking, signing child has thanked their lucky stars that their child could express himself in some way, alleviating so much frustration from breakdowns in communication.
Ultimately, signing will NOT cause your baby to have delayed speech. It WILL be one of the best things you do to help prepare your baby for talking!
For Smart Sign functional signing opportunities please see www.smarttalkers.org.uk