Today is the last day of exams for H!

I have fulfilled my duty to get her to college sixteen miles from our home by 9 am five times in a three week period. I consider that a massive achievement just for me never mind what H has achieved. And lets not forget that this incredible person fell out of the school process in 2015 having made virtually no measurable progress in the 3 years previous to that.

Diagnosed in with autism in 2011 and with other diagnoses to follow H is designated as having “complex needs”. Those complex needs could not be met by three mainstream schools in our local area and yet pushing for specialist provision never felt quite right either. Did we want to send H over 25 miles away at least, each day? Did we want to potentially limit her opportunities in the area that she excels?

We decided not, we slipped into home ed and found our home as it were. Home ed has been everything and more and I will never for one minute regret our decision to jump in to it. In fact it was more like throwing ourselves into it because I believe that to get the best out of home ed you need to be committed to exploring every opportunity and take chances with experiences that might be way outside your comfort zone.

But, there is always a but isn’t there………

We could not have got H to GCSE point without a team of people who have supported us and without HO [named this for privacy] college. The first blocks in the team are most definitely the members of the home ed community in the West Midlands who trod the path into the course specifically designed for Home ed students and who ironed out some of the potential issues before we even got there. Next came the SEND team at HO who not only listen but who seem to relish our outside the box thinking and instead of challenging us have come with us and risen to the occasion and done exactly what we have needed them to do. Then there is B, H’s speech and language therapist who alongside us co produced selective mutism training for the support staff and SENCO at college and A from the autism team who is rapidly becoming a fantastic advocate for H and who is enabling her voice to be heard [not just from me for a change]. J is the EP who is quietly in the background but a presence who gives us confidence to continue to push hard for what is right for H, to keep H at the centre of the process and to ensure that H gets every possible chance to reach for her goals. Then two great tutors who with the amazing support from H’s LSA [another A] have become confident in understanding H and who have gently and kindly stirred her brain into action and given back some of the confidence that H had in her abilities when she was a pre schooler and which had somehow got lost during her eight years in school. Finally and definitely the most important member of team H [except H of course] is C who is not only our friend but also the person who reminded H that actually learning doesn’t have to be torture and that she can move past the trauma that was inflicted on her by people in her past who will remain nameless because apart from this one sentence they do not belong in this blog and are well and truly gone out of our lives.

C for the first 6 months of working with H didn’t even expect H to touch a writing implement, such was the level of her fear around formal learning, maths in particular and yet within a few sessions he was telling us that H has a good maths brain and that it was the trauma which had led to her complete lack of faith in herself that was her greatest barrier.
It has taken all of these people plus of course me and H’s dad and a whole host of other people in our lives to get H to this point:

And so somehow we reached May of year 11, the start of exam season. Of course exams are stressful and the point of reasonable adjustments is to hopefully level the playing field just enough to allow people with SEND to stand a chance at accessing them alongside their peers.

But in my opinion GCSE’s have been made inaccessible to autistic people due to their unpredictable nature; for example, the second English Language paper is H’s stronger paper generally because there is usually an opportunity to debate or argue a point, something she excels at verbally at home and more recently has shown great flair at on paper in mock exams. However this year the examiners decided to throw in a curve ball and ask for students to argue a point about whether looks or intellect is more important. This for many teens was a peach of a question and twitter was full of comments about the Kardashians and Love Island and how they had used examples of these in their exam. For H and other autistic people who have absolutely no interest in the world of celebrities this was catastrophic. H can argue all day about the benefits or not of school uniform, of holidays in term time and in fact of school and the system in general but creating an argument around looks vs brains was so far outside her comfort zone that she fell apart.

By the time I collected her she had utterly convinced herself that she had failed, was physically unwell and went to bed for two days when we got home. There is nothing I can say to her to make her feel better about it, she so badly wants to get her magical “4” and while this doesn’t matter to us because we know she can retake it, it matters massively to her especially as in her most recent mock she got a high 6 and she just wants to be done with it.

For anyone who doesn’t understand why this would be so difficult for an autistic person I will tell you. Autism can impact on a persons ability to picture in your mind things which occur everyday for many people, things which matter to some people but don’t to you, means that anything that has never been experienced is a complete unknown to many autistic people and this extends to exact experiences not just similar ones. Thinking about how looks might impact on a person has never ever come up in our home or our life, we preach acceptance. We don’t spend much time on celebrities because to us they are not real people, they don’t live real lives and only appear on mainstream TV which we give little time to.

But not just English, maths too can throw curve balls such as Deon with the 60 biscuits, the dude who wanted to paint tanks which disappointingly turned out to be the container variety of tanks not the army type, or Julie who did a coin toss 4000 times! I mean who does that? An autistic person can easily get caught up in the likelihood of that actually happening and the maths question is lost to the nonsense. Yet we have to put our children through this.

My duty is done, I have ensured that H has attended college and arrived in time for all exams. I have supported, encouraged and trusted H to do the job to the best of her ability and I believe she has done this 100%.

If H doesn’t get her golden tickets [Maths and English GCSE] then it will be simply because the exam system is set up to fail autistic people and not due to H’s lack of ability but my guts tell me she will always blame herself and how is that fair? 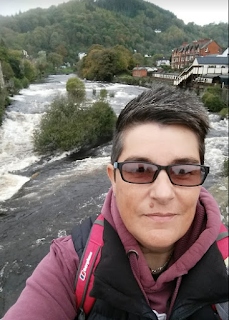