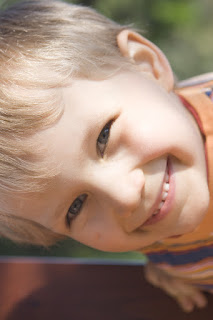 I work with a fabulous nursery who have just taken over a pre-school too. I'd like to say who but it might identify the child so I won't. They have such a great balance of professionalism and caring. They also really understand children.

I saw a 4 yo chap today who sat in my little group and pretty much did everything that was asked of him. He joined in, answered questions, volunteered answers, helped another boy who was struggling. Only a minor protest when he didn't get a gold star first, in fact.

Last time I'd seen him was before xmas when his behaviour was awful: I'd even managed to be hit around the head with my own boot! He'd ripped things, stole things, grabbed items out of my bag and ran off with them, tipped the bubbles on the floor while maintaining eye contact in some sort of act of defiance, refused to co-operate, etc etc

In many nurseries he would have spent hours on the naughty step, been told off, been discussed by staff as the 'really naughty one'. In this one, however, they knew better: they knew that his behaviour was actually as a result of low self-esteem, poor confidence  and a desire for attention which didn't matter if it was positive attention or negative attention.

They've given him a good routine with firm boundaries, ignored what they don't want to re-inforce and praised what they want to encourage. He's really doing well and is miles away from the boy he was before xmas! I'm sure they're will be a few hiccoughs along the way but with the right support and understanding he's doing fantastically!