Research: Autism and the sisterly bond 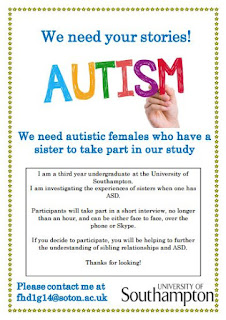 As the youngest of three siblings, with two older brothers I have been fascinated with how siblings interact. Playing with dolls and making up stories was my rest from running around the garden covered in mud with my brothers. During these hours I often wondered what it would be like to have a sister. Would we argue over toys and clothes, or would we share everything and get along perfectly? If our personalities were fundamentally different, would that make things easier or add another difficulty to the relationship?
This is what I have been investigating in my current research. Previous research has stated that sisters- when one has autism- have a more positive bond than a brother-sister or brother-brother pairs.  In my project ‘Understanding the experiences of sisters when one has Autism Spectrum Disorder’ I aim to hear the stories of sisters who have been effected by autism in one way or another, to gain an understanding of what may influence their relationship. Ultimately, I hope that this will add to the understanding of autism and sibling relationships and perhaps one day be used to improve the bond between siblings when one has autism.

Much of the current research focuses on the parent-child bond or the parent’s experiences. But the sibling relationship is often the longest relationship we will have in our lifetime, and it is so often overlooked in research and life in general. Furthermore, I would like to understand this research question from the perspective of the autistic sister to learn both sides of this fascinating bond.
I have already interviewed a number of neurotypical women who have an autistic sister. And I am now looking for autistic females who have a sister! Participants must be female, over the age of 16, have a diagnosis of ASD and have at least one sister.  If you, or anyone you know, are eligible and interested in being a part of this novel research, please get in touch with me at fhd1g14@soton.ac.uk
Participation will include one interview which will last no more than an hour- this can be done over the phone, skype or in person. Interviews will be recorded, transcribed and anonymised. Although some quotes may be used in the write up of the report, there will be no way of linking them back to you.

I am hoping to have this research published in an academic journal and I would greatly appreciate any help in achieving this. Whether it is taking part or passing this on to anyone who may be interested.