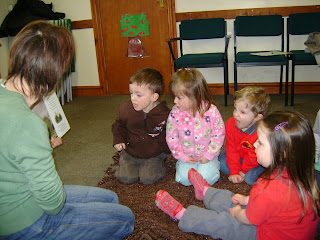 There are several reasons why a child of 2 might not be talking as expected including a general developmental delay, problems understanding, a family history of late talking, they might not see the need, they may be on the autistic continuum or belong to a family who don’t realise that they need to interact with their toddler in order for him or her to learn to talk.
Whatever the reason, I created the Teeny Talker groups (part of the Smart Talkers Pre-School Groups range) to help.  The sessions are great fun and have specific aims involving songs, games, puppets and a snack-time. I have to say that sometimes these aims may not be clear to the observer as working with 2 year olds can be extremely unpredictable.... but never, never boring! They're not just for children with delayed language and are designed to encourage confidence and communication in all 2 year olds. I love running these groups and we get some fantastic results so I thought I'd share a couple of case studies with you.
Case Study 1
J. B. was 2 yrs 5 months and had no spoken words. He got by with a combination of pointing and grunts. His mother, a single parent was concerned that this would affect his relationships with other children. His behaviour was deteriorating due to frustration at not being able to get his message across. His Health Visitor referred him to speech & language therapy but also advised his mother to take him to the Small talk group at Boney Hay. He is an only child.


J.B’s attention was fleeting and he preferred to run around for the first two sessions. He could not wait for his turn and had small temper tantrums as a result. No spoken language was observed at this time. However, six sessions on he could sit and attend to the group tasks, join in for his turn and more often than not volunteered to be the helper at snack time which meant he was last to be served! He could produce 25 or more single words and could even produce 2 words together e.g. more pop,  bubbles gone.


J.B. was already a confident little boy but he and his mother needed encouragement to communicate verbally and to observe how the Therapist’s techniques can be used at home in everyday situations. He received his NHS appointment but has been discharged because he is making such encouraging progress.
Case Study 2
N. J. was 2 yrs 6 months when she came to the group. Her parents were concerned because she did not speak at all, she was effectively mute. The Health Visitor had recommended they come along.


For the first 4 sessions she was very quiet but co-operated fully for the tasks. She appeared to enjoy the songs and her understanding was very good. Gradually, she began to join in with the songs and then she named items. Now 7 sessions on, she is talking when it is her turn and will spontaneously ask for drink or biscuit at the snack time. She can use 2-3 word sentences. Her confidence to communicate was the biggest stumbling block and the group acted as a forum in which to develop this. The signing and augmentative communication techniques just alleviated the pressure for her. She is using her new found skills in most situations now.
We've got Teeny Talkers at the Willows, Boney Hay, Featherstone, Springhill, Glenthorne and Landywood Children's Centres this term. If you would like us to come to your area or group, let us know!
For more information ring 0844 704 5888 or 07970 202561  www.smarttalkers.org.uk
Posted by Libby Hill at 11:42